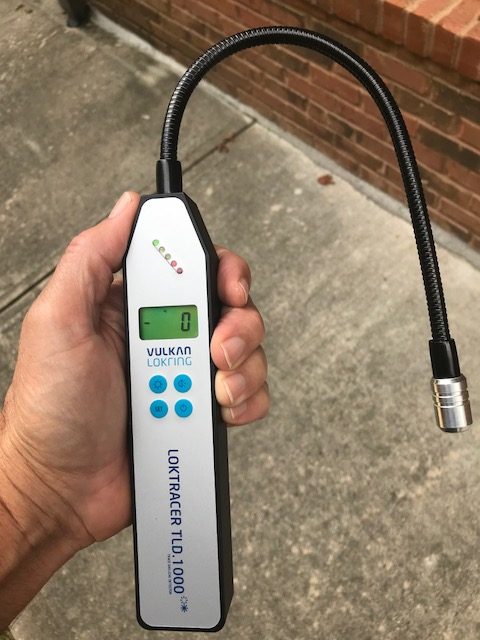 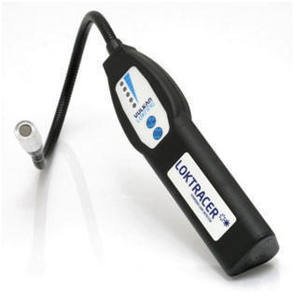 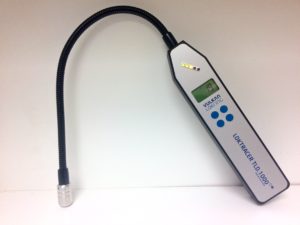 Hydrogen leak detectors are used for applications in determining leak locations in systems containing hydrogen. It accomplishes this by leaks using a tracer gas of 5% hydrogen/95% nitrogen. This mixture is a non-combustible, green label gas. Our TLD.1000 and TLD.500 Hydrogen Leak Detectors use a semiconductor type chip technology to monitor hydrogen gas to determine leak rate intensity.

Helium sniffing has been the preferred method of tracer gas leak detection for decades. However, in the last 10 years, high helium cost and limited availability have made tracer gas leak detection using helium less attractive. At the same time, the 5/95 hydrogen/nitrogen mixture tracer gas has been stable and low in cost. To add to that, hydrogen leak detection technology is as good as helium sniffing while the cost of equipment is much less. Helium leak detectors can be either mass spectrometer or thermal conductivity technology. Compared to hydrogen tracer mixture, helium mass spectrometers are 20x more costly than hydrogen, while helium thermal conductivity leak detectors suffer from less sensitivity and more frequent service. Also, both helium methods pull a gas sample into the probe which can cause clogging of the probe. Our hydrogen leak detectors are "impact" detectors meaning no gas is drawn into the detector, resulting in no clogging.

A. In 100% concentration, that is the case. We always recommend using 5% hydrogen mixed with 95% nitrogen because hydrogen is non-combustible in nitrogen until its concentration reaches 5.7%. This mixture is green label non-combustible and will never have the ability to combust or increase the intensity of a fire.

Q. Will the hydrogen in the mixture settle out and cause an unsafe condition?

A. No, it remains mixed at all times. All inert gases cannot stratify. The air we breathe is comprised of a mix of nitrogen, oxygen, helium and even a small part of hydrogen, but remains a homogeneous mixture of gases. So same applies to the 5/95

A. The TLD.1000 shows a quantifiable H2 leak rate and and can detect into the low single digit ppm values. The TLD.500, while not displaying a quantity of H2 (has a series of lights that indicate more quantity), can detect concentration ranges in the 25-35 ppm range based on our testing. The detection limit is actually smaller but the user cannot always distinguish that low of a signal as a leak or no leak. Therefore, the 25 ppm is a good point at which the leak can be distinguished as a leak.

Q. Which is better as a tracer gas, hydrogen or helium?

A. In the past, helium was the best tracer gas because of its availability, the equipment to detect it repeatedly and reliably and its low background in air (0.5 ppm). Hydrogen mixture as a tracer gas is now popular because instruments like the TLD.500 and TLD.1000 have improved in being able to find small leaks. Also, helium is in short supply and expensive. Hydrogen is a good choice also because of low background in air (0.05 ppm).

Q. What is the cost of the 5% hydrogen, 95% nitrogen tracer gas compared to helium?

A. 5/95 is a better gas than helium. Helium is a rare gas that is mined with natural gas. Helium has important uses in MRI's and science research. Hydrogen and nitrogen are plentiful on earth. Cost of 5/95 is a fraction of the cost of helium gas.

Q. Where have hydrogen leak detectors been used in the past?

A. Hydrogen leak detectors were used extensively in locating leaks during the telecom boom of the late 1990s and then became used in HVAC and RAC applications starting in about 2007.